I installed a beta version of a Debian package on my Raspberry Pi 3 and received the following error:

The suggested solution was to add the arm architecture as follows:

and then re-run the install command:

I did so and the package installed and worked as expected. However, this made me wonder:

After several hours of reading, experimenting and writing this blog post, I think I know. I’ll start by breaking the command down.

Note: The above solution was a work around while the package was in development. The production version is compiled for the armhf architecture.

dpkg is a command line tool for managing Debian packages. To install a package, the dpkg tool needs to recognize that package’s architecture. Supported architectures are in the /var/lib/dpkg/arch file. The following commands display information about the architecture(s) dpkg supports: 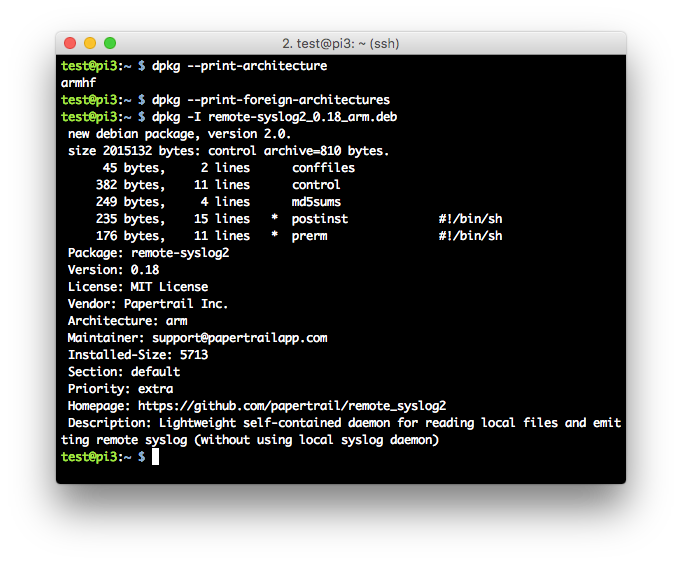 In the above screenshot the dpkg --print-foreign-architectures command returns nothing because a foreign architecture has not yet been added.

Architecture in this scenario refers to an Application Binary Interface. There are two ways to install a package that does not match the current architecture: 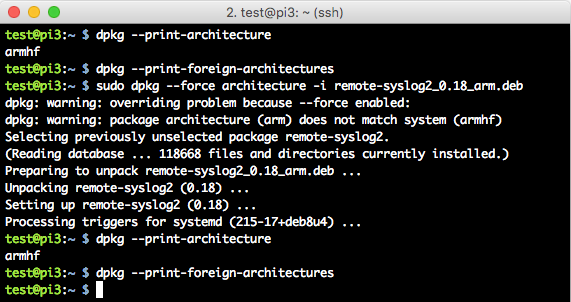 arm is the name of the Debian ABI for the ARM architecture. ABI, or Application Binary Interface, is a low level interface. It defines how software interacts with each other on a given architecture. From Linux System Programming:

The ABI is intimately tied to the architecture; the vast majority of an ABI speaks of machine-specific concepts, such as particular registers or assembly instructions. Thus, each machine architecture has its own ABI on Linux. In fact, we tend to call a particular ABI by its machine name, such as Alpha, or x86-64. Thus, the ABI is a function of both the operating system (say, Linux) and the architecture (say, x86-64).

arm is the original Debian port of the arm-linux ABI. It is now considered obsolete and newer ports such as armel and armhf have replaced it. armel is the default Debain port for the ARM architecture. armhf is a port that uses the “hard” Floating Point Unit. This means a hardware unit, as opposed to software, performs floating point calculations.

First remove any packages that use the architecture. There are two options to remove the packages:

Next, use the dpkg --remove-architecture arch_name command to remove the architecture.

Note: the following error will occur if any packages of the given architecture exist:

The screenshot below shows the errors and results from removing the arm architecture: 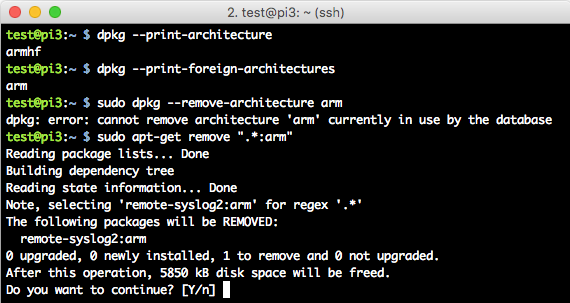 After choosing ‘Y’ at the prompt, the package is removed. Now thearm architecture can be removed successfully:

Errors from adding the new architecture

One of the questions I had was if there were any consequences from adding the arm architecture. The answer is ‘yes’. I received the following error when I attempted to update my Raspberry Pi using the sudo apt-get update command:

This error occurred because apt-get tried to get arm packages that do not exist. To resolve this I specified it to only get armhf packages. I did this by modifying the following two files:

In each file I added [arch=armhf] to the listing.

In the following screenshot the first file in the diff command contains the modification I made and the second file is the original file.

I discovered one side effect from adding a new architecture, but are there any more? One possibility is the package may not work if it depends on specific architecture attributes. In my case the package worked, but others may not.

When faced with installing a package that uses a different architecture:

Wow! I learned a lot! It is amazing what lies beneath one command.